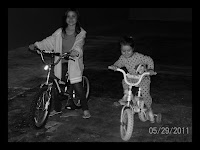 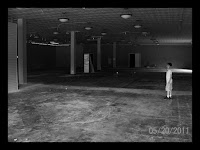 That was the very roller rink, bike track and ripstick arena that my kids called their own (until it filled up with furniture...and too fast in their opinion!).  We have since enjoyed family Easter egg hunts at both locations, birthday parties and many games of hide-and-go seek.  You will often see my babies (they really aren't babies anymore, but that's what I call them) at both locations, especially during the summer.  My 7 year-old loves helping at the register, my thirteen year old is dabbling in decorating and design planning, and my 15 year old helps move furniture around.  So maybe, just maybe, the furniture bug will rub off on one of them!  If nothing else, they will have fond memories of playing at the stores and helping customers.
This final photo is of myself and my sisters, at what used to be Gambles.  We returned there last year and took a trip down memory lane with all of our own children in tow.  Let's just say it wasn't how I remembered it, but I was a baby after all!  So next time you swing into the stores and see unusually young "employees" hanging around, tell them to get back to work, or at least get back to making memories!

This is from Kalamazoo...to you! 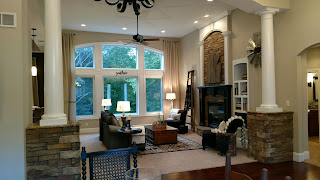